BETWEEN ITS UNIQUE DESIGN AND its eye-catching hue, Calgary’s Peace Bridge has become a cultural icon within the downtown core. Its bright red color stands out against both the river beneath and the buildings behind it, while paying homage to the red of Canada’s flag.

Unlike most bridges in the world, the impressive length of the pedestrian bridge stretches unsupported across the Bow River. No beams or cables were included in the architect’s plans, as the steel structure was designed to support its own weight. Given its tube-like shape and the crisscrossing pattern of its walls, the unique bridge has often drawn comparisons to a finger trap puzzle pulled across the river.

The Peace Bridge was proposed to accommodate increasing traffic on Calgary’s pathways. Designed by Spanish architect Santiago Calatrava, the bridge better connects the downtown core with communities across the river. Although construction of the bridge met with some delays, it was finally completed in 2012, and nowadays, thousands of pedestrians and cyclists cross the bridge on a daily basis.

Although its $25 million price tag was controversial amongst Calgarians, the bridge has become a central aspect of Calgary’s skyline, appearing in travel books and posters around the world. Whether you’re an architecture buff or you just need a quick way across the Bow River, Calgary’s Peace Bridge is well worth a visit.

Know Before You Go

The bridge spans between Bow River Pathway on the north side of the river, off Memorial Dr NW, and Eau Claire Park on the south side.

No comments to show.

Fully furnished 3 bedroom main floor AC up and down…

About this space Furnished executive air conditioned home on large… 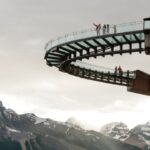 Compare
You can only compare 4 properties, any new property added will replace the first one from the comparison.

What is there more kindly than the feeling between host and guest?